On December 11th, NowThis released We Are Their Voice | The Regan Russell Story, a new and explosive documentary directed and produced by Jordan Ehrlich of CaveLight Films. It was posted across their social media platforms, attracting 2.1million views on Facebook, 1.2 million on Instagram and over 100,000 on Youtube in the first 24 hours.

The viral documentary features new eyewitness testimony, legal experts and close family who tell the story of Regan Russell, her brutal killing and her worldwide impact. Russell (65), a decades long pioneer in Canadian animal rights activism was violently struck and killed by a pig transport truck entering Sofina’s Fearmans “Pork” slaughterhouse on June, 19th. She had been attending a special Toronto Pig Save vigil at the facility which brutally kill 10,000 sentient pigs each day, to protest Ontario’s passage of Animal AgGag Bill 156 just two days prior.

Celebrities were quick to react on Instagram including Game of Thrones star Nathalie Emmanuel and actress Amanda Seales. Golden Globe and Emmy nominated actress Debra Messing described Regan’s death as “devastating” questioning why the truck driver was not criminally charged, and Carmit from the Pussycat Dolls said, “This makes me so angry at animal agriculture. Regan was a martyr and her passion and legacy will bring awareness.”

This comes just weeks after Joaquin Phoenix attended a Toronto Pig Vigil at Sofina owned Fearmans Slaughterhouse to honour Regan Russell and meet her family and friends. On June 27th, 2020 he also issued a statement in support of Regan Russell.

Speaking about his motivation behind the documentary, Director Jordan Ehrlich said, “This incident transcends a story solely about a tragic death or the horrific treatment of animals. My goal was to tell Regan’s story with the urgency, heart and context that it deserves.”

Ontario Bill 156 is an undemocratic and unconstitutional piece of legislation which infringes on the right to assemble and criminalizes activists and whistleblowers working to expose animal exploitation. It allows animal agriculture to avoid the legal and economic consequence of their behavior with fears it may be seen as a licence to kill.

Anita Kranjc, co-founder of Toronto Pig Save, said, “We appreciate all the celebrities that have spoken from their hearts and used their platform to raise the profile of Regan Russell and her violent death. We hope that others will also be inspired to join us in demanding justice for Regan Russell. We are calling on the Halton Regional Police Services to release the video evidence of Regan’s death which they are withholding and lay criminal charges against the truck driver and those enabling this culture of violence against activists. We demand the immediate repeal of the unconstitutional ag-gag Bill 156 and the introduction of a Regan Bill of Animal Rights. We call on Fearmans slaughterhouse to immediately stop their mass killing of pigs and transition to an innovative plant-based food system.” 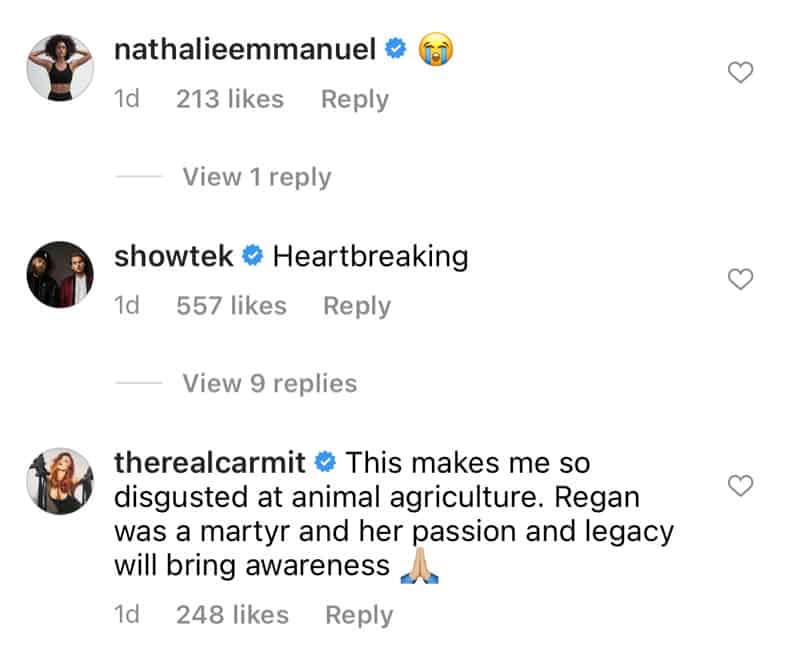 Toronto Pig Save who mark their 10th anniversary this month, use the strategy of bearing witness to animals in need outside slaughterhouses using a love-based community-organizing approach informed by Leo Tolstoy and Mahatma Gandhi.

Animal Justice is Canada’s only national animal law advocacy organization. They believe that animals need lawyers, and their legal team work to pass strong new animal protection laws, hold industries accountable for widespread animal suffering, and give animals a voice in courtrooms across the country.

In the documentary, animal rights lawyer Camille Labchuk from Animal Justice who plan to launch a legal challenge to Bill 156 says, “The industry here is very powerful, it will stop at nothing to make sure people can’t see the horrific conditions that animals are enduring.”