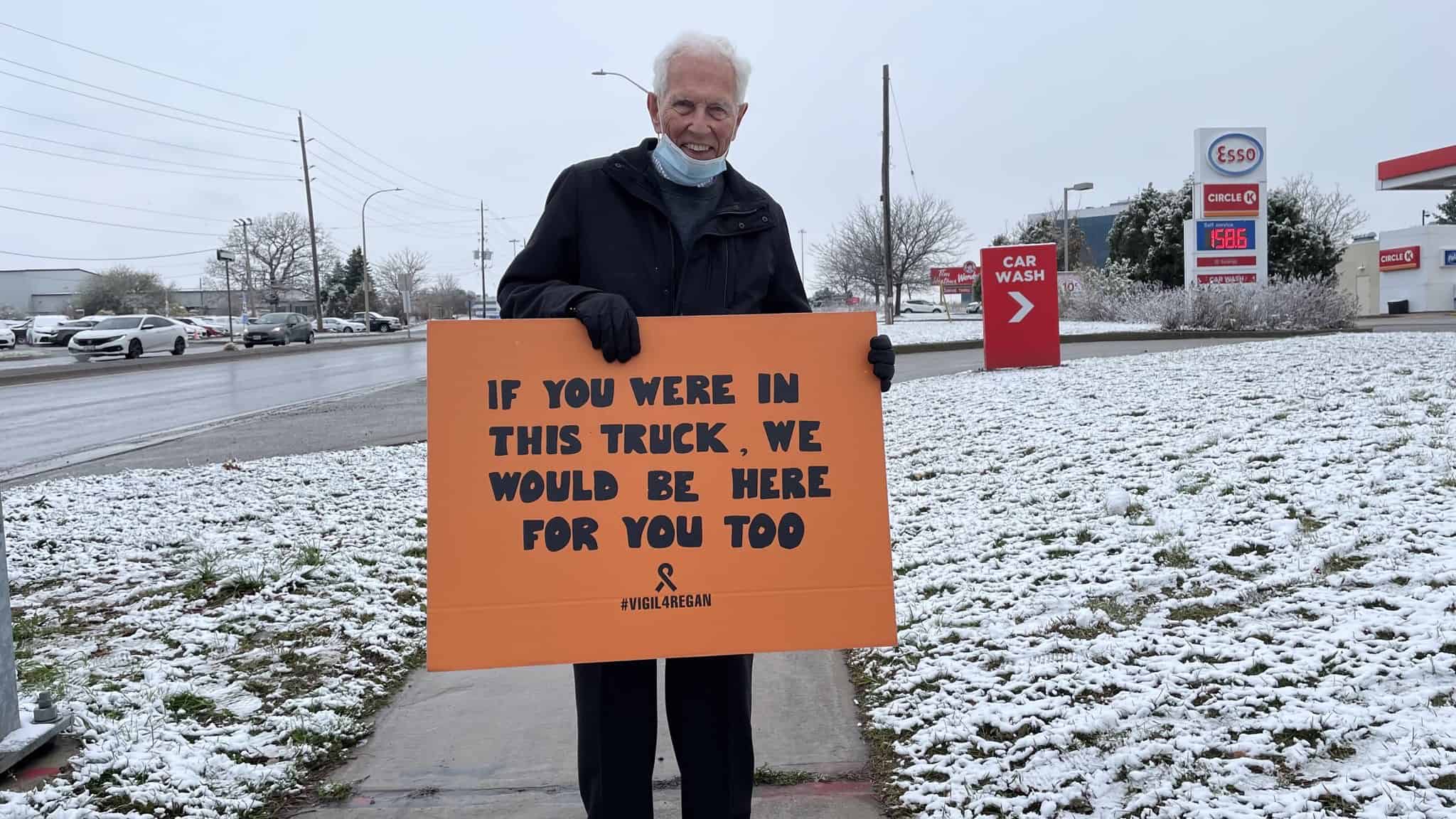 A father’s plea on his 92nd birthday: ‘Doug Ford: repeal the Ag-Gag Law’ in memory of his daughter Regan Russell who was killed protesting the bill

Regan Russell was protesting against Bill 156 when she was struck and killed by a truck carrying pigs to Fearmans slaughterhouse in Burlington on June 19, 2020.

More than two years since his daughter’s death, Bill Russell continues to honour her memory and fight injustice by attending pig vigils even as he celebrates his 92nd birthday. Bill plans to attend a Toronto Pig Save vigil on Wednesday, December 7 from 8:30-10:00 a.m. at Fearmans, 821 Appleby Line, corner of Harvester Road. Members of the media are welcome to attend and speak to Bill.

In an emotional video of a gathering by Regan’s graveside on November 2, Bill delivered a touching tribute and prayer for his daughter.

“I have to say thanks if there is a god for giving us Regan,” Bill said. “Thank you for our dear beloved Regan, who lies here as we think of her life and how she gave that life in protesting animal oppression.”

Worldwide, activists continue to pay tribute to Regan Russell and mourn her tragic death by attending sanctuaries and celebrating animals rescued in her name.

Rescues for Regan
In June 2021, activists in Italy liberated Regan the sheep from ILCO in Acquapendente, one of the largest sheep slaughterhouses in Europe that slaughters around 800,000 animals each year. The rescue was carried out in honour of Regan through dialogue with the slaughterhouse owners.

During a chicken vigil at a farm in Şile, Turkey, a curious farm worker spoke with organizers to learn about why they bore witness to chickens and other animals. The conversation planted a seed, which later led to the farm worker aiding the rescue of a sick chicken, named Regan, awaiting slaughter.

Bill was arrested with his daughter Regan at a fur protest at the Eaton’s salon in Toronto in 1987. He joined Regan at MarineLand protests in Niagara Falls in 2012. Bill also joined Regan and other activists in protesting Bill Cosby at his Hamilton show in 2015.

Background:
Regan Russell (65) was a decades-long pioneer in Canadian animal rights activism, who had peacefully campaigned on behalf of non-human animals for over 40 years. On June 19th 2020, she was violently struck and killed by a transport truck carrying pigs entering Sofina’s Fearmans slaughterhouse in Burlington, Ontario. She was attending a special pig vigil with Toronto Pig Save to protest Bill 156, which had passed the previous day and to bear witness to some of the 10,000 sentient beings who are violently killed there each day.

Charges of Careless Driving Causing Death were brought against the truck driver, with the trial due to commence in the spring of 2023.