Call To Action! Toronto Slaughterhouse Ordered To Permanently Close In 2019 Due To E-Coli Contamination But Reopens Under New Management, World Animal News, March 2

Nina Devries, Exposing animal cruelty should not be a crime, The Hamilton Spectator, July 26th

Mira Miller, People just covered themselves in fake blood in the middle of a downtown Toronto street, BlogTO, July 17th

Samantha Crags, Joaquin Phoenix speaks out about death of Regan Russell: ‘We will never back down’, CBC News, June 29th

Liberation Hour, Anita Kranjc – Creating Social Change with the Save Movement, May 1st

Please watch this excellent Jane Unchained News livestream of Los Angeles Animal Save‘s night vigil at Farmer John’s slaughter plant on January 19, where many activists showed up to give the pigs water and love. Joaquin Phoenix came, still in his tux, straight from his big win at the SAG awards!

People magazine: Joaquin Phoenix Comforted Pigs at L.A. Slaughterhouse After SAG Award Win: ‘I Have to Be Here’

Hollywood Reporter: Joaquin Phoenix Followed SAG Awards With Vigil for Pigs: “I Have to Be Here”

FOX News: Joaquin Phoenix comforts pigs at slaughterhouse after SAG win: ‘I have to be here’

Vanity Fair: Joaquin Phoenix, Super-Vegan, Raced to L.A. Slaughterhouse After SAG Win: “This Is an Injustice”

Regina Pig Save protested the Maple Leaf Finals Rodeo at the Canadian Western Agribition. Their protests were covered by the CBC, November 30th:

– Calf-roping event at Agribition has ‘no place in civilized society’: animal rights activists
– ‘With Love for the Animals’: why some people are protesting the rodeo at Agribition

Lauren O’Neil, Toronto’s most infamous slaughterhouse just had its licence suspended. Toronto Cow Save has been calling upon the feds to shut down Ryding-Regency “Meat” Packers cow slaughterhouse for years. BlogTO, September 26th

Mark Devries, director of Speciesism: The Movie, talks about the power of bearing witness while at a Toronto Pig Save vigil, September 18th

Toronto Pig Save held the first All Day Vigil of 2017: Watch this moving video report by Agnes Cseke, including performance by Amy Jean Davis, Los Angeles Animal Save organizer, June

The Save Movement’s Warped Tour Adventure in the US, Journiapp, June 16th

VIDEO: From their Joint Vigil in solidarity with the #PigTrial, Guildford Animal Save and East London Chicken Save asked: “As an animal eater, do you believe that animals are happy to die for your dinner? May 4th

Charges Dismissed: Compassion Is NOT a Crime
Toronto Pig Save co-founder Anita Krajnc was acquitted of criminal mischief Thursday, May 4th, after being charged for giving water to a pig in a truck on the way to a slaughter plant. This is some of the extensive press coverage the verdict received:

– Now Toronto: Are pigs people, too?

– The Guardian: Judge dismisses case of woman who gave water to pigs headed to slaughter

– The Washington Post: Activist who gave water to pigs is found not guilty of a crime

– The Globe and Mail: Judge acquits woman who gave water to pigs

– Global News: interview with Anita Krajnc on their Morning Show.

Toronto Fish Save is born with an aquarium demonstration on March 25th. Media coverage of the event was outstanding:

– CBC News: Aquatic animals don’t belong in a ‘bathtub’ say Ripley’s Aquarium protestors
– CityNews Toronto: The right to life, freedom and justice may be considered inalienable for humans, but a group staged a protest in Toronto today demanding non-human animals — in particular, fish — also be granted those rights.

COMPASSION IS NOT A CRIME: Ingrid Newkirk of PETA bears witness with Toronto Pig Save, March 9th

#PigTrial news: on March 9 Judge Harris set May 4 as the date on which he would render his verdict. This is some of the extensive press coverage the pig trial’s closing arguments date received:

Damien Clarkson, We’re Winning: 10 Signs That Veganism Will Take Off In 2017, Plant Based News, December 22th

Alex Lockwood: The Save Movement, A Peaceful Action For Change, Plant Based News, December 1th

Lady Goes on Trial for Giving Water to Pig on Way to Slaughter, Jane Unchained News

Nicole Thompson, Pig owner testifies at trial of animal activist, says he was concerned about safety, The Toronto Star, August 24

VIDEO: Emily, the Bite Size Vegan, talks about the importance of bearing witness at the All Day Vigil with Toronto Pig Save, Cow Save and Chicken Save, June 19th

VIDEO: Overcrowded Pigs Are Yelled at on Way to Slaughter. PETA posted our heartbreaking video from our Pig Save vigil

Is it a crime to give a pig water on a hot day?, CBC Radio, March 18th

Jake Kivanc, An Animal Rights Activist Is Going to Court for Giving Water to a Pig, Vice, November 4th

Lila MacLellan, Toronto woman charged after giving water to pigs shares her side of the story, Yahoo News!, November 2th

Zach Ruiter, On the front lines with Pig Save, NOW Toronto, June 17th

Ari Nessel, 16 People Who Made a Big Difference in 2014, Huffington Post, December 24th

PETA, “22 Heartbreaking Photos From Pigs’ Journey to Slaughter” (featuring the photos from Toronto Pig Save vigils)

Our short video: “Water for pig angel victims in Toronto’s heat wave” was featured on US network news on the Jane Velez-Mitchell show. Jane Velez-Mitchell poignantly says, “look… look at these images Those are pigs now on the way to slaughter and a group — there`s a group actually in Toronto called the Toronto Pig [Save] that runs up with water to the trucks carrying pigs to slaughter and gives them water because there was over 110 degrees and they were in this sweltering, sweltering truck.”

Free From Harm: “Meet Your Bacon: Footage of Pigs In Transport Truck Goes Viral” (July 24, 2013)
“Footage of the pigs frantically scrambling for water, and of heart-broken volunteers telling the pigs, “I’m sorry,” has pushed the video into the viral mainstream.” -Ashley Capps, Free From Harm

Our Hen House: “A sip of water for pigs heading to slaughter” (July 30, 2013)
“Toronto Pig Save forces people to see these animals as the individuals they are. Like us humans, they need food and water. Like us humans, they feel pain. And like us humans, when their dignity is stripped away from them, and they are relegated to a mere commodity, their only hope is in others who are brave enough to bear witness, savvy enough to get the word out far and wide, and alive enough to actively advocate for a new world that is free of animal suffering. SHARE THIS VIDEO! “– Jasmin Singer, Our Hen House

Christian Cotroneo, “Pigs In Toronto Heat Get Water En Route To Slaughterhouse (VIDEO)”  The Huffington Post (July 29, 2013)
“Volunteer Karen Bowman described the experience as ‘incredibly overwhelming.
It’s impossible to relay the suffering I witnessed that day. I just can’t. I don’t know how to.’
She was grateful, however, that the plight of the doomed pigs was captured on video.
‘This video is important because it shows, without question, the suffering of living beings that are the meat and dairy industry,’ she explained. ‘How can one watch this video and ignore the connection between a life and a meal?’ “

Victoria Niederhoffer, ““An Interview with Anita Krajnc: 10 Questions For the Founder of Toronto Pig Save”,” My Non Leather Life, April 10, 2013

The work of Jo-Anne McArthur / WeAnimalsMedia.org is featured in the January 2013 issue of Alternatives Journal. Click here to read more and see her heart wrenching photos for Toronto Pig Save. Also, see interview with Jo-Anne McArthur in “The Witness“ in the Laika Magazine, January 30, 2013 and Jo’s photo essay “We Animals: One Photographer’s Compassion in Action,” in Photo Life magazine, March 31, 2013

Barbi Lazarus, “Why I hold vigils for pigs and cows being led to slaughter”, The Globe and Mail, March 12, 2103 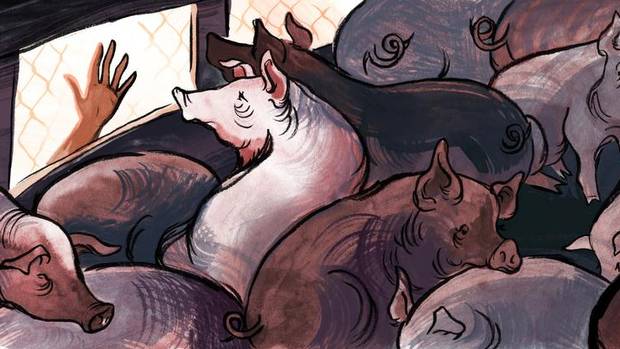 When I tell people I spent my morning attending a vigil for pigs or cows entering a slaughterhouse, the reaction is usually: “Isn’t that depressing?” or, “I could never bring myself to do that. It’s too sad.”

A look inside one of the many tractor trailers carrying pigs to the Quality Meat Packers, from the traffic island at Strachan Ave. and Lake Shore Blvd., on Wednesday. The trucks line up at the island to turn left to the abattoir. Photos: Carlos Osorio/Toronto Star 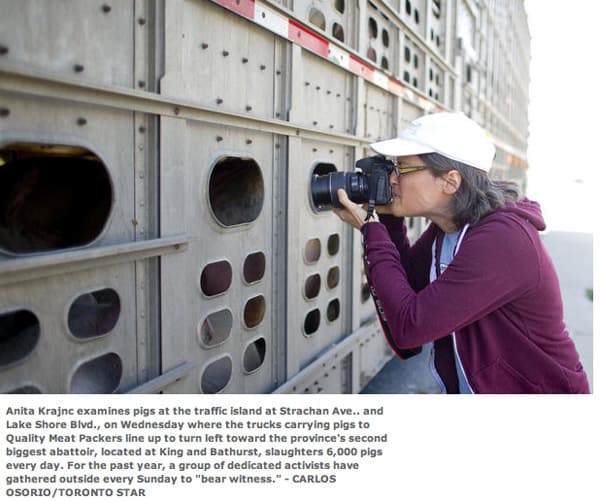 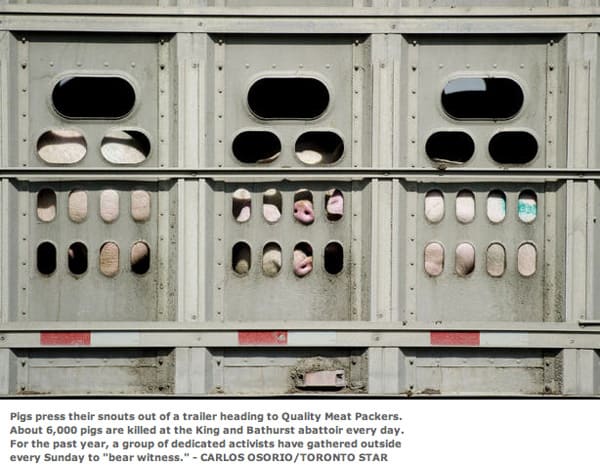 Julie O’Neill’s Photography for a Compassionate World profiles Toronto Pig Save in “Heroes in Hogtown”. 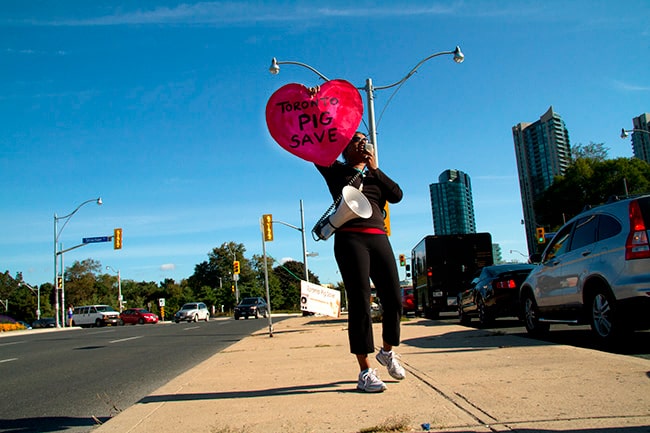 “Bearing Witness” — a guest blog by Anita Krajnc, Co-Founder of Toronto Pig Save,  Jo-Anne McArthur’s We Animals project, May 1, 2012

Now Magazine is one of the first major media organizations, besides rabble.ca, to publish a photo depicting the pigs suffering inside transport trucks heading to Quality Meat Packers. Thank you Now! 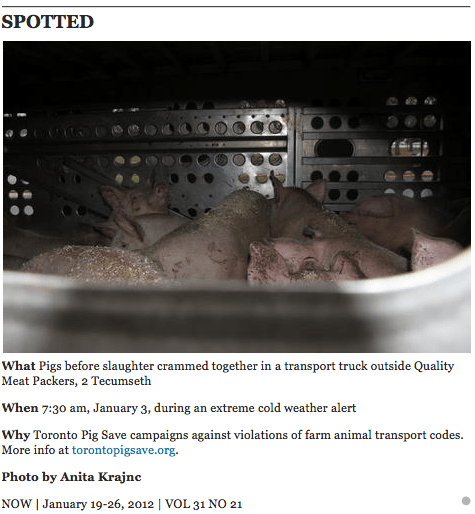 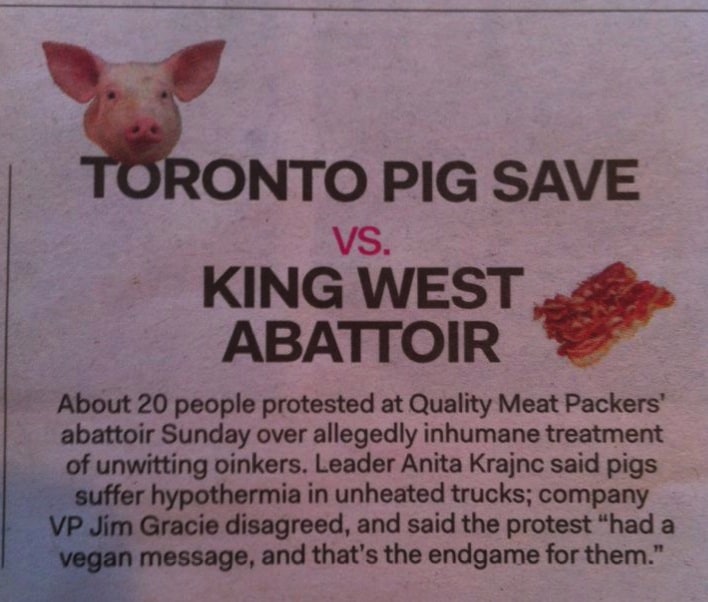 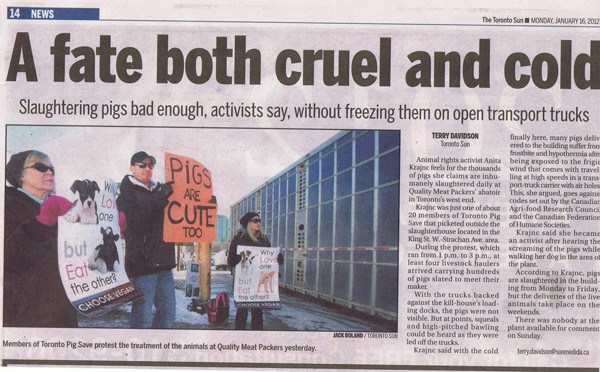 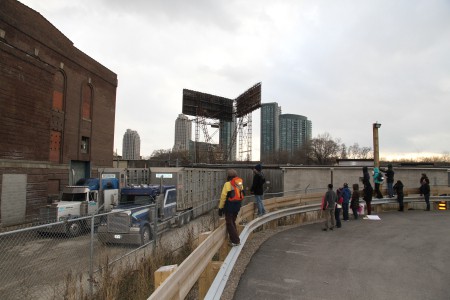 The Toronto Pig Save is a collective of artists, activists and writers based right here in Toronto; the group’s almost weekly protests bear witness to the suffering of pigs en route to Toronto’s biggest slaughterhouse, Quality Meat Packers. ”Bearing Witness with the Toronto Pig Save,” Animal Voices, Click here to download an MP3 of the show, November 15, 2011 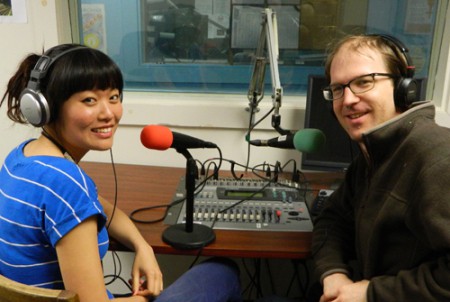 Doris Leung’s fantastic, fast paced and informative one-hour segment on “Pigs and Toronto Pigs Save”, along with some poignant animal rights music, on “Hands and Tails: arts, animals and everything else” on CFRU 93.3 FM.

Freedom of Species – animal advocacy on the airwaves with Kate Elliott (Australia) 855 AM podcasts available via 3CR website. Toronto Pig Save is an animal rights, pro worker group that holds weekly vigils on ‘Pig Island” to bear witness to the pigs in transport trucks on their way to Quality Meat Packers slaughterhouse in downtown Toronto. Find out about the power of bearing witness and how this group is committed to “giving slaughterhouses glass walls.”

Now is a forward-thinking magazine giving voice to the under-represented and marginalized, which is why I was disappointed to see a feature celebrating pork in the last issue (NOW, January 13-19). Social justice for animals means not butchering their bodies for the sake of a few moments of gastronomic pleasure. Sure, most people eat meat, even those who consider themselves progressive, but many of your readers may not know that most breeding sows are kept severely confined for the duration of their lives in crates where they can hardly move. Their offspring reared for meat have miserable lives in barren, crowded pens, breathing in toxic fumes from being forced to live above their own excrement. One only needs to walk by Quality Meat Packers at Niagara and Tecumseth to hear the pigs’ screams. How about NOW Mag promoting veganism as the future?