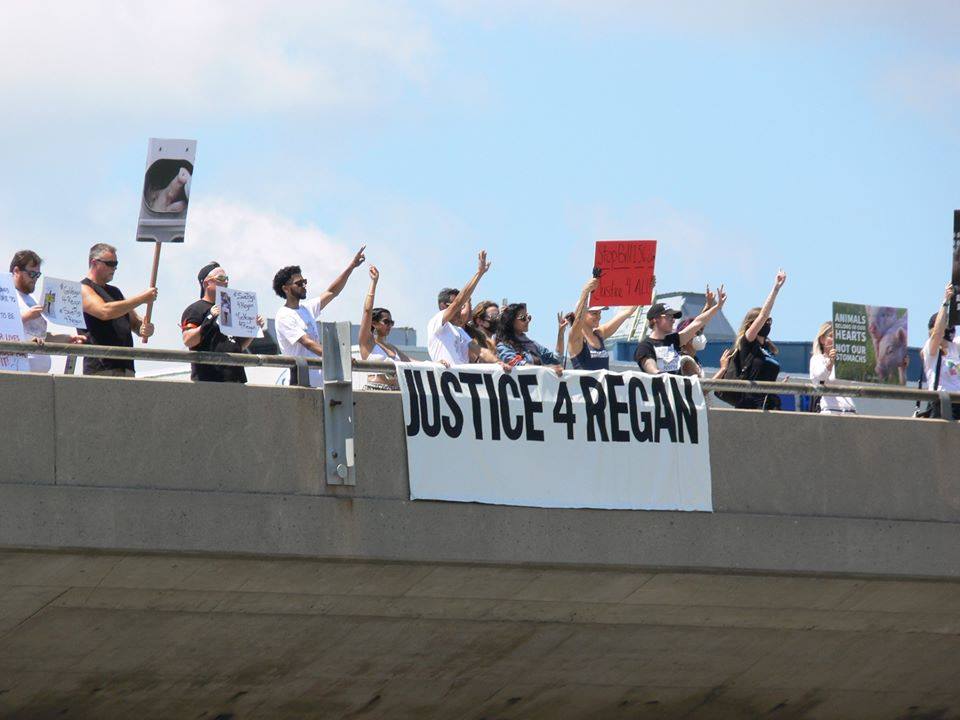 —-
Animal Save Movement responds to charges brought against killer of Regan Russell: “Feeble and do not amount to justice”

Animal Save Movement today condemned the Halton Regional Police Service for bringing charges of Careless Driving Causing Death against the driver of a pig transport truck in the June 19 death of Regan Russell.

Russell was attending a special Toronto Pig Save vigil to protest Ontario’s passage of the unconstitutional “ag-gag” Bill 156 just two days prior, and had been giving water to dehydrated pigs on one of the hottest days of the year.

“These charges are feeble and do not amount to justice for Regan. Enough is enough – how many more lives will be lost at the hands of Sofina and Fearmans before they agree to a safety policy?” said Anita Krajnc, co-founder of Animal Save Movement. “They’ve rejected these calls far too long and have Regan’s blood on their hands – we will not rest until Bill 156 is repealed.”

Animal Save Movement demands the release of video footage obtained by police that show the incident, so that it can be independently reviewed.

Russell, 65, was a pioneer of Canada’s animal rights movement and had peacefully campaigned on behalf of animals for more than 40 years. On June 19th an unnamed 28-year-old male drove a pig transport truck into Russell outside Sofina’s Fearmans slaughterhouse in Burlington.

The Powell family said, “We are disappointed by the lack of criminal charges, and would like respect and time in digesting this information.”

“Today’s charges must be upgraded to reflect the death of a kind and gentle soul who did no wrong,” said PETA President Ingrid Newkirk. “Regan Russell spent her last moments on Earth showing kindness to animals, and everyone can honour her memory by going vegan.”

On June 19, Russell was participating in a peaceful vigil outside Sofina-owned Fearmans slaughterhouse when she was struck and violently killed by a pig transport truck. Earlier at the Toronto Pig Save vigil she had been providing water to pigs on a scorching-hot day, along with six other activists.

Regan was standing at the slaughterhouse entrance when the driver unexpectedly accelerated, turning in Russell’s direction and ending her life. This took place two days after “ag-gag” legislation in the form of Bill 156 was approved by the Ontario government, following months of extensive lobbying by meat, dairy, egg, and other animal industries..

There’s a long history of reckless driving from truckers. Toronto Pig Save called for safety protocols to be implemented after vigil attendees were nearly hit by trucks on a number of occasions and launched a Change.org petition demanding a safety agreement (“Michael Latifi [owner of Sofina’s Fearmans pig slaughterhouse]: Stop endangering activists! Negotiate a safety agreement at Fearmans now!”).

Animal Save Movement demands that the Ontario government immediately repeal Bill 156, and replace it with a Regan Bill of Animal Rights that would protect the rights of protestors to demonstrate safely; defend whistleblowers, journalists, and others who document animal suffering; recognize the personhood of pigs and other animals; defund animal agriculture; and invest in plant-based food systems in Ontario.