Art to Help Save Pigs

Art touches us in ways that words cannot. Many compassionate artists have created moving and powerful art to help us connect to, and save pigs. 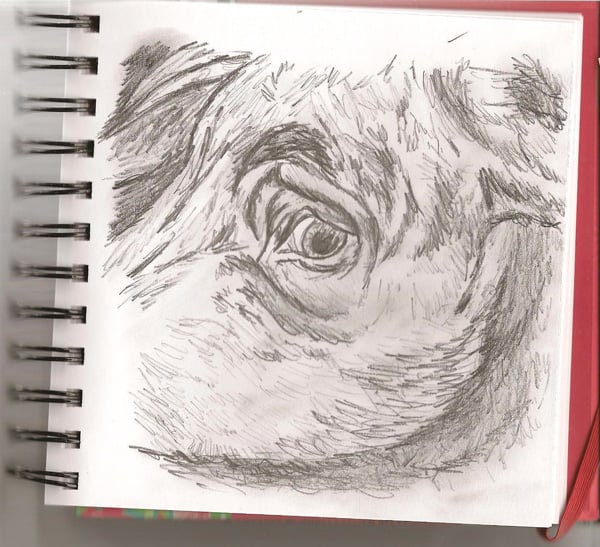 Tara: The Story of One Sow is a sketch Twyla Francois, a former undercover investigator, drew of a sow she tried to help at an auction. Twyla says “The sketch has not been exaggerated in any way – this was her real expression.  She was pleading to have her pain stopped.”

As Tara’s story shows, farm animals desperately need us to advocate for them wherever they are.  We need volunteer inspector programs at auctions, at collecting stations and during transport – anywhere these animals are publicly accessible. 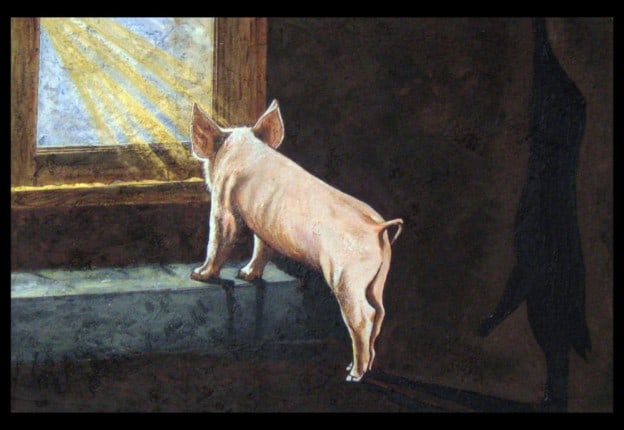 “In my experience, pigs are the worst treated of all farm animals. It is as though they are singled out for abuse. If they have the misfortune of being a sow they will not know one moment of kindness their whole life through. Sows (breeding female pigs), are confined to barren metal crates only slightly larger than themselves for their entire adult lives. They develop crippling arthritis, are prone to fractures and often become lame. The vast majority, have pneumonia from living atop and breathing in their own waste and the waste of up to 5,000 other sows. They are driven mad by the incessant boredom, the constant craving for food and the continually thwarted natural instinct to build a nest for their soon-to-arrive piglets. She will have only 2 weeks with her babies (during which time she remains in a crate although somewhat larger), who will then be ripped away from her (I’ve seen sows punched in the face to remove them). She will be re-inseminated, then put back into a crate for the duration of her pregnancy.

By the time these sows are culled they are so worn out, beaten up and decimated they can barely walk. Because they are seen as so worthless they are often discarded on dead piles, killed in inhumane ways or abused with unspeakable acts.

No other animal seems to be made to suffer as pigs do.”  – Twyla Francois 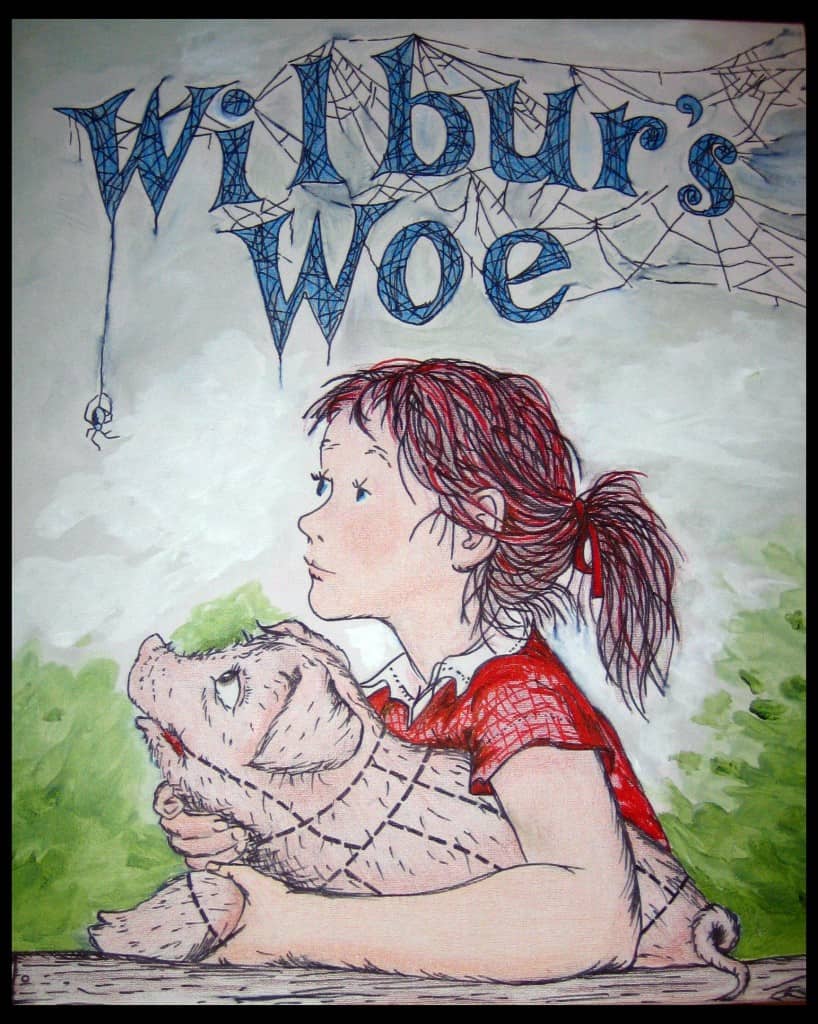 “This is a simple painting to remind us what Wilbur’s fate is – to contrast between how we are allowed to see farm animals as children, versus the adult vision we have of them (as cuts of meat). It reminds us that when we eat ‘pork’ we are eating an animal as worthy, intelligent and loving as Wilbur was…. there are varying levels of cruelty according to the ‘product’ it is produced into. Pepperoni, bologna, sausages and sausage patties are the most cruel: made from culled sows (breeding female pigs who’ve been confined to a crate their entire lives) and culled boars (who lived their lives equally confined and had their teeth broken at least twice a year). With pork loin, ham and pork roasts – look for dark red, tough patches in the meat. These are called “blood splash” and are the result of being hot hit with electric prods. The electric prod causes deep tissue damage which appears as these patches we’re all familiar with. It means the pig was likely loaded and unloaded roughly with electric proddings severe enough to cause damage many layers down.”  – Twyla Francois

The only way to avoid cruelty is to go vegan and not contribute in any way to the exploitation of innocent pigs and other animals. 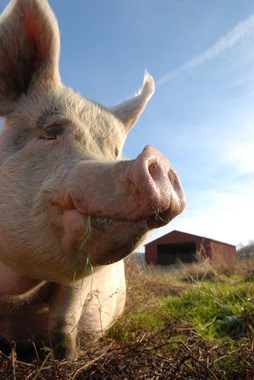 This beautiful photo, by Jo-Anne McArthur of We Animals Media, is of a happy liberated pig living in peace at Farm Sanctuary. Jo-Anne says, “The photo was shot at Farm Sanctuary. I took the shot from the pig’s point of view… I like to shoot animals from their height, showing a bit more of what they might see, rather than the typical shots we take, standing above them.”

We asked Jo-Anne what motivates her in her photography of animals around the world both in situations of severe exploitation and, alternatively, of buoyant animal rescues.

“Why I do the work I do?  I take photos of our relationships with animals. The good and the bad. There are a lot of nice portraits of animals out there but they don’t make us reflect on our often abusive relationships with them.  We might appreciate the animals aesthetically but that doesn’t move us to change, to help, to look at what is going on.  My photos aim to look beyond the beauty of an animal; perhaps we’ll see the reflection of our actions in the photos of them.”  – Jo-Anne McArthur 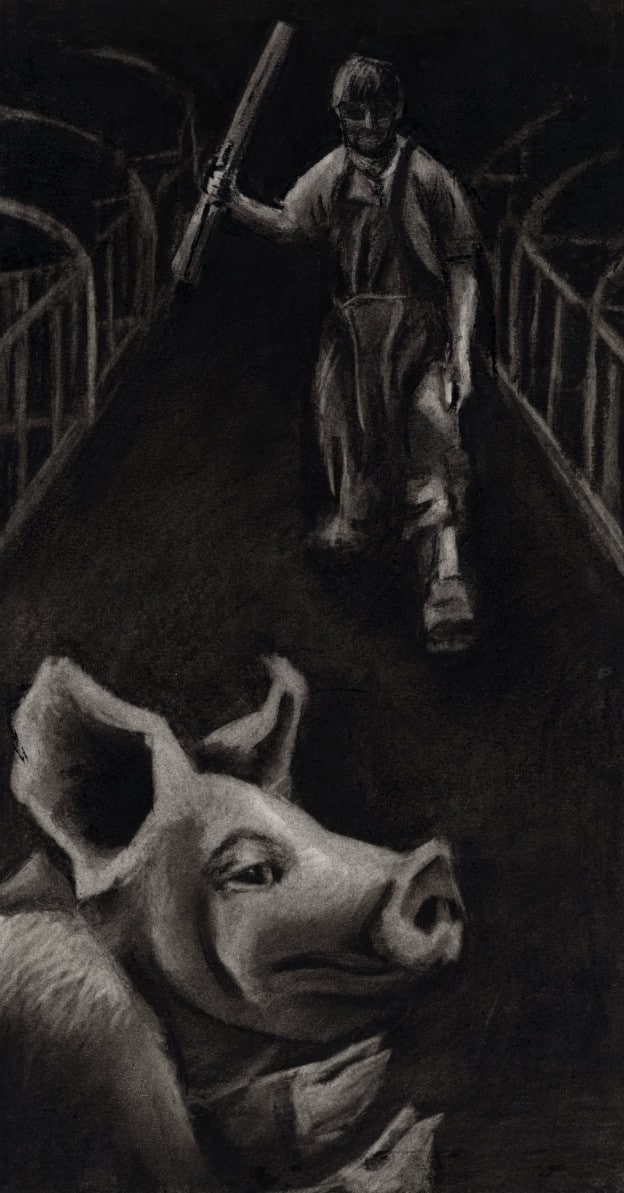 “Behind closed doors innocent, helpless, scared pigs cower in fear from the everyday horrors they face. Slaughterhouses can only inspire violence. Hopefully this can inspire change.” 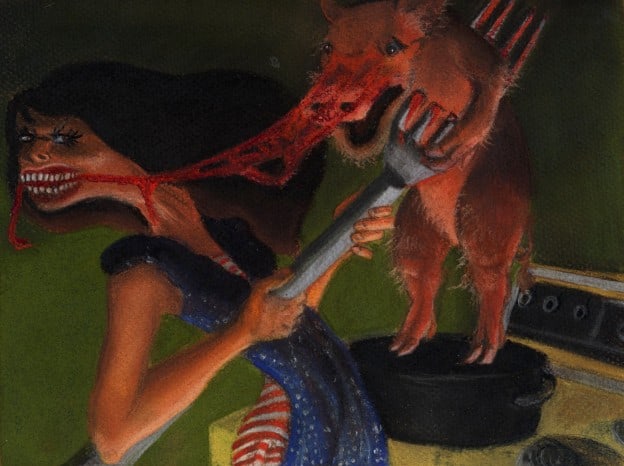 “This one is a statement on how monstrous eating meat really is. The image allows you to see the truth behind taking a taste of an over processed piece of meat. Straight from the slaughterhouse kill floor to the kitchen, no middle man involved.”  – Angie Carreiro 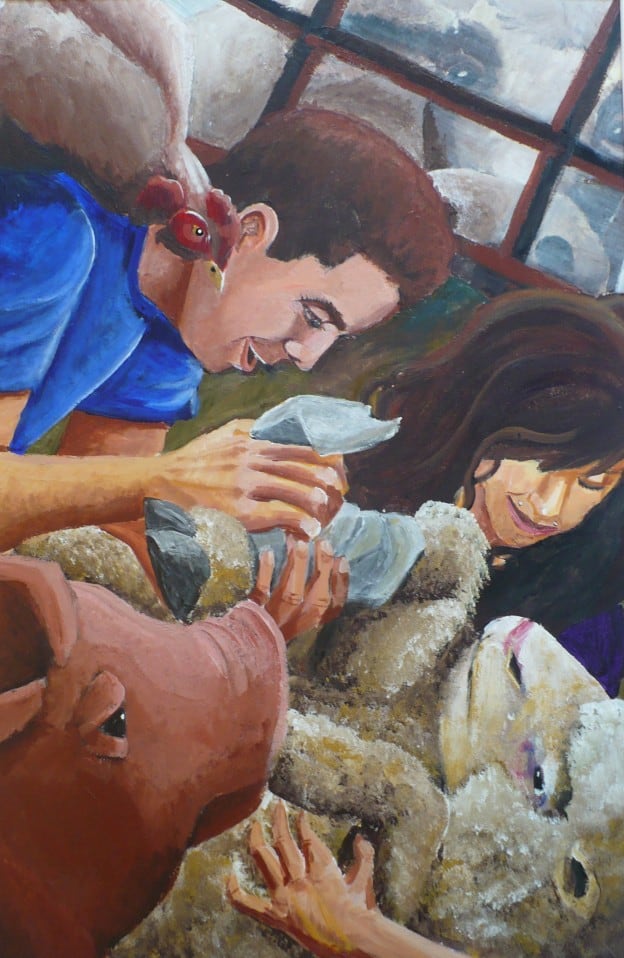 Angie says, “This image shows the flip side of the cruel industry. Caring for animals is a rewarding, euphoric act. My friend Kevin said, after visiting a local stockyard:”

“It is not until you work with animals in a happy atmosphere that you realize all the pictures you have seen of animals who look scared in factory farms, slaughterhouses, or any other hostile environment are truly terrified, you can see the difference in their eyes.” 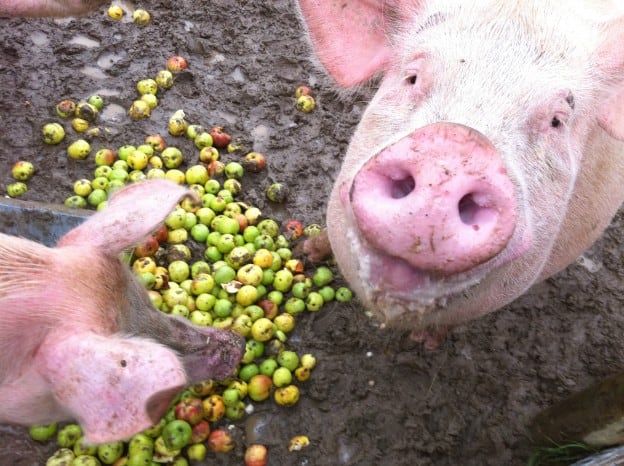 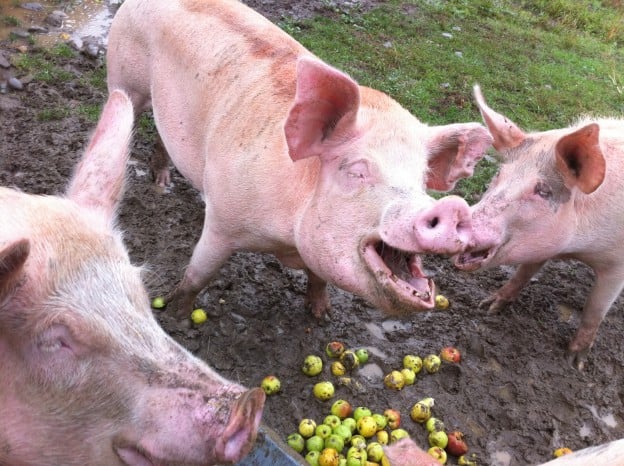 There are a lot of apple trees, so the pigs get special treats. Photo by Kevin Weil. 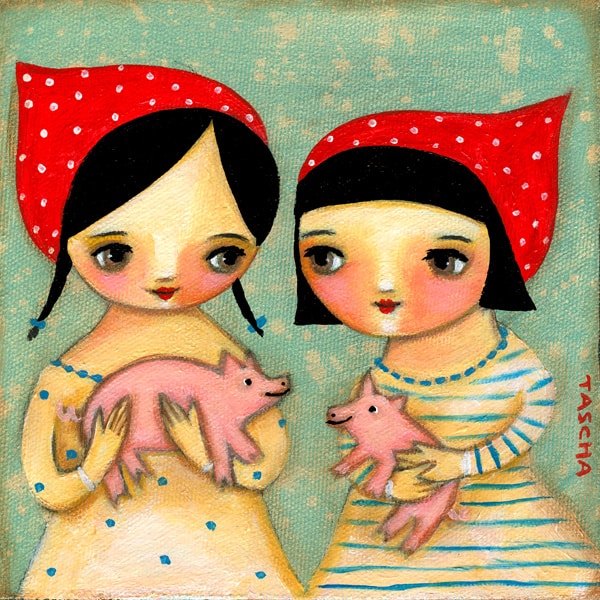